Throw Out Your Keyboard & Mouse! Crowdfunding the Future of Input Devices with Sensel Morph

We’re joined by Ilya Rosenberg and Aaron Zarraga, co-founders of Sensel, and inventors of The Morph. Ilya and Aaron believe The Sensel Morph will pave the way for a new generation of tactile, and responsive interfaces – interfaces that will entirely replace the keyboard and mouse and, in doing so, transform the making of art, music and gaming.

Wired Magazine went so far as to say that the Sensel Morph “May Be the Future of Input Devices” And TechCrunch calls their invention “A Keyboard On Steroid.s”

To turn their their concept into reality they turned to Kickstarter in order to raise $60,000 over the course of a 45-day campaign. Along the way, they attracted more than 1,600 backers, and blew way past their initial target, raising more than $440,000. 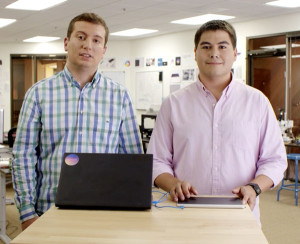 Links and things mentioned in this show

Words to live by

The Crowd Scene theme music is by Kim Boekbinder. Special thanks also to Jim Fowler.

Tweets by @KickStarsShow
Here Comes The Sun! Inventor Paul Droege On The Power of Crowdfunding and Solar...